Malaga, a Spain city on the southern Mediteranean shoreline sports a rich Catholic Cathedral with the name of ‘Santa Iglesia Catedral Basílica de la Encarnación’. It is the centre of veneration for the event of the immaculate conception where God removes the stain of the original sin from Mary so that Jesus can be born without sin. This belief is not a hard core christian belief and is only really a part of the Catholic church’s doctrine.

In relation to Mary there are two godly interventions. First of all the virgin conception, where no male of the human species was needed for a child to start developing in her womb. That virgin conception is a part of mainstream christianity. Secondly there is this idea that Mary was sinfree by choice of Gods actions and that she had been sinfree all her life so far, thanks to God’s actions.

Mary has a few phrases attributed to her from New Testament, Luke:

My soul magnifies the Lord and my spirit rejoices in God my Savior, for he has looked with favor on the lowliness of his servant. Surely, from now on all generations will call me blessed; for the Mighty One has done great things for me, and holy is his name. His mercy is for those who fear him from generation to generation. He has shown strength with his arm; he has scattered the proud in the thoughts of their hearts. He has brought down the powerful from their thrones, and lifted up the lowly; he has filled the hungry with good things, and sent the rich away empty.

That sounds like an endorsement of God, and expresses some of the truths held amongst the christian mind still held today; feed the hungry, enbolden the spirit, punish greed, pride and the mighty. Also mercy for those obedient to God. It holds a lot of truth within a christian context.

When out visiting any historic site I take many pictures, and have a twist to continuously photograph any symbolism in architecture, layout or wood. On the left entry door to the cathedral this image is carved. I will call it the palmtree. (But I think it is not, obviously, just a palmtree.)

The palmtree however, does not look like a regular palm tree. Its branches are bunched up into three outflows; left, up and to the right. As a tree, it has a stem and seemingly some earth and roots in that earth. Things brings to mind another arrangement, but now from the bhuddist or Hindu enlightment perspective; 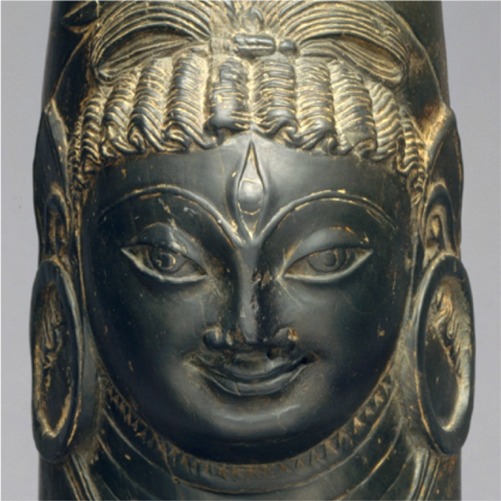 So there is are three similar objects (eyes and leaf bunches) in both images. There is a vertical shaft and at the bottom a mouth or earth. The hindu image is about enlightenment. Lets look at what enlightenment means:

There is no permanent heaven or hell in Hinduism. In the afterlife, based on one’s karma, the soul is reborn as another being in heaven, hell, or a living being on earth (human, animal). Gods too die once their past karmic merit runs out, as do those in hell, and they return getting another chance on earth. This reincarnation continues, endlessly in cycles, until one embarks on a spiritual pursuit, realizes self-knowledge, and thereby gains mokṣa, the final release out of the reincarnation cycles. This release is believed to be a state of utter bliss, which Hindu traditions believe is either related or identical to Brahman, the unchanging reality that existed before the creation of universe, continues to exist, and shall exist after the universe ends. source

The question then can be; Is Mary actually describing the same state as an enlightened bhuddist when telling Elizabeth about her state and feelings as stated above?

One way to look at this is to consider what is going on in the meta physical sense in both occasions; Mary’s declarations about God and someone becoming enlightend.

With regards to sin, the bhuddist tradition bypasses sin by saying no one can be a sinner. What they do have, is a continuous cycle of rebirth if you do not become enlightend. Effectively, if you do not live correctly, your soul is going to be reborn time and time again.

So, bhuddists break the cycle forever if they behave correctly in life.

Mary’s immaculate conception also breaks a cycle, namely the cycle of passing on Adam and Eve’s eternal original sin onto the next child born. This breaking of the cyclye is done, so that an eternal curse is lifted and there is a new beginning.

Pureness in the catholic church is; “to refer to a perfectly sinless nature that manifested itself in glory in a moment of grace”. That sounds alot like enlightenment again.

I looked round the cathedral in Malaga, but found no other palm tree or bhuddistic references. I did have a moment of pause when I saw one of the altars in the coves around the main altar. If you are familiar with the reclining and  resting bhudda statues, this should ring a bell.

The Take away from this blog may be that there is the fact that in both stories; The enlightenment of a bhuddism and that of Mary’s sin removal, an eternal cycle is broken through being one with god(liness).

The pattern and its principles

Imagine you have a stick
Scroll to top